KANYE WEST’S FLOW IS COMEDY GOLD ON “THE CLEVELAND SHOW” 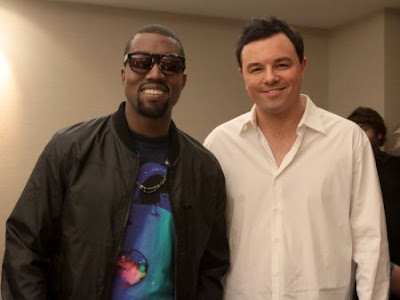 International hip-hop superstar and 12-time Grammy Award winner Kanye West and Academy Award nominee Taraji P. Henson get animated when they lend their voices to THE CLEVELAND SHOW, the highly anticipated FAMILY GUY spin-off set to debut this fall on FOX. West will appear as KENNY WEST, an all-around cool kid and the archenemy of CLEVELAND JR. (Kevin Michael Richardson), and the two will engage in a “rap battle” for the affection of high school hottie CHANEL (Henson).

THE CLEVELAND SHOW is a new animated series that follows everyone’s favorite soft-spoken neighbor CLEVELAND BROWN (Mike Henry) to his hometown in Virginia, as he settles down with his high school sweetheart, DONNA (Sanaa Lathan); her unruly kids; and his own 14-year-old son, Cleveland Jr. (Richardson). Once in Virginia, Cleveland has a few surprises in store for him, including ROBERTA (Reagan Gomez-Preston), a rebellious new stepdaughter; RALLO (Henry), a 5-year-old stepson who loves the ladies; and a collection of neighbors that includes a loudmouth redneck, LESTER (Richardson); a hipster wanna-be, HOLT (guest voice Jason Sudeikis); and a pious pair of talking bears, TIM (Seth MacFarlane) and his wife ARIANNA (guest voice Arianna Huffington).

Kanye West’s fourth consecutive chart-topping album, “808s & Heartbreak,” was released in November 2008 and has sold over 1.5 million copies to date. He has received numerous accolades for his latest album, and his hit single “Heartless” has been at the top of the charts for 16 weeks and counting.

Taraji P. Henson earned an Academy Award nomination in 2009 for her supporting role opposite Brad Pitt in the critically acclaimed film “The Curious Case of Benjamin Button.” Henson has appeared in “Hustle & Flow” with Terrence Howard and “Talk to Me” opposite Don Cheadle. Her upcoming films include “Hurricane Season” opposite Forest Whitaker, “Once Fallen” with Ed Harris and Tyler Perry’s “I Can Do Bad All By Myself.” Her television credits include “Boston Legal” and “Eli Stone.”

THE CLEVELAND SHOW is a 20th Century Fox Television production. Seth MacFarlane, Rich Appel and Mike Henry are executive producers and co-creators of the series.
Posted by imademesss.com at 5:01 PM No comments: